'Be Kind Online' is my design for a PSA campaign geared toward encouraging better online behavior. The campaign features three poster designs

I had the opportunity to submit a design for a series of posters that were to be for a PSA campaign centered around encouraging people to behave better or to be kinder in their online and social media behavior. I chose to specifically address the tendency to be confrontational or to be a "troll". It is common to be tempted to be drawn into online arguments and debates, but we forget that since we are not in person and feel a sense of anonymity while we are online, we often tend to be rude to each other and no-one seems immune to this without some awarenedd while engaging each other online.

My focus on trolls drew me toward some graphic memes that are commonly seen on the internet in various places that have become icons associated with trollish behavior. I drew on some of this imagery to visually draw a contrast and had the idea to place the trollish graphics in real world situations and places where you would not expect the label to appear. This technique of substitution seemed to work well for this campaign. 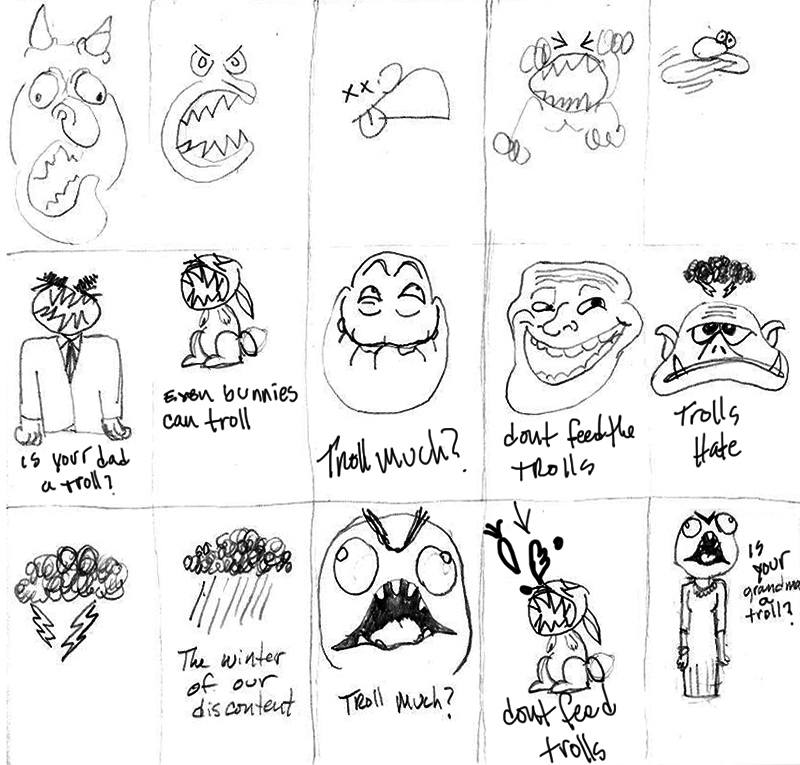 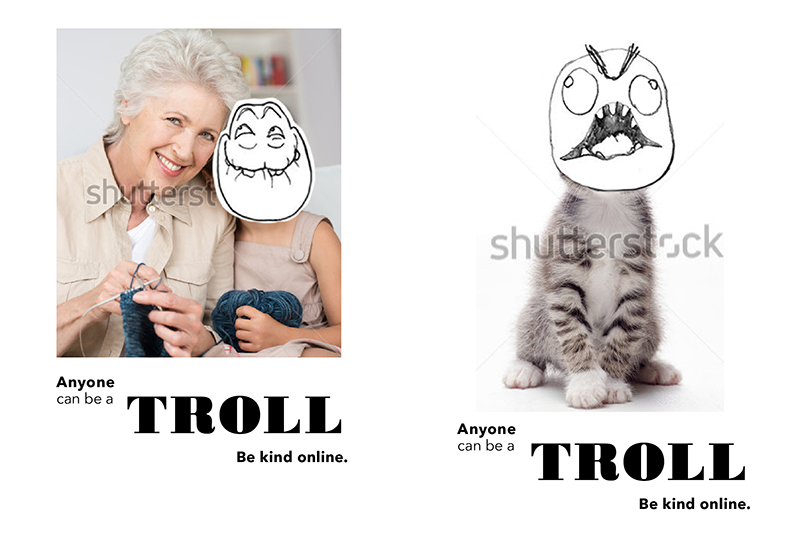 With the digital mockup stage, I was experimenting with stock photography and choosing adequate subjects. Though kittens are cute that no-one dislikes, kittens do not engage online of course, so I didn't go far with that idea. I eventually narrowd my subjects to a friend, a parent, and a grandma or young girl.

Another goal in this stage was to experiment with typography to find a good strategy for getting across a quick narrative. There needed to be a hierarchy to help with this but the type needed to fit the photography well. Tried a heavy serif type for the 'Troll' and a sans serif for the smaller type. This was ok but didn't really add to the narrative very well. I also did not feel I had found all my photos, so I needed to do more searching.

At this stage I was also trying to finalize my copy. The friends copy seemed good but only for that poster, so I ended up dropping that copy for the other. In the end I edited down to "Don't be a troll" which is more direct than to say "Anyone can be a troll".

I was also becoming aware that my photos were all of female subjects and of course men and boys need this message as much or more than girls and women. for this reason I was still searching for adequate stock photos. 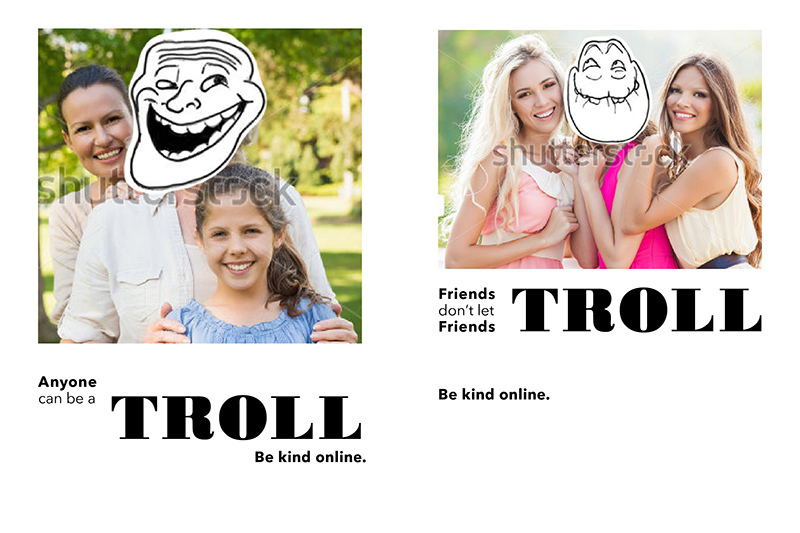 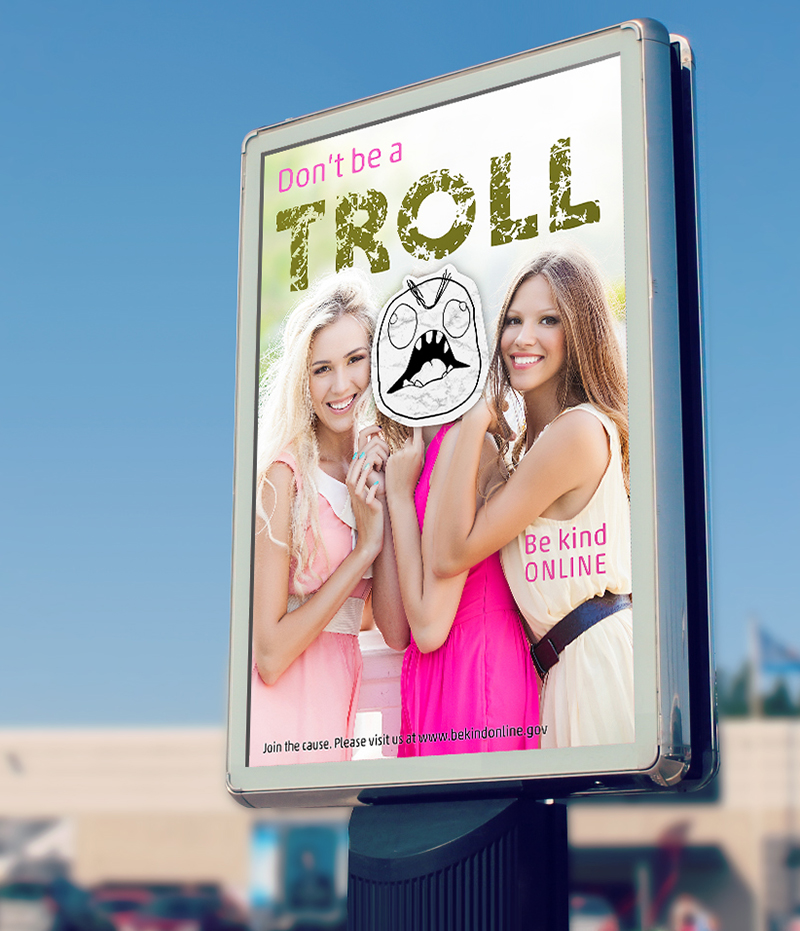 The friends poster does hav one variation from the arrangment of the text in the other photos and that is the location of the "Be Kind Online" tag. this is because if the lack of whitespace below the Troll title. The location I used does create some separation from the message but I feel it was the best solution and that issue was not to large to be overcome. this poster is the most colorful poster of the three.

For the typography, I settled on Akko for the smaller type as it is a nice modern rounded typeface, and I created a custom treatment of a heavy gothic typeface that I distressed, scanned and processed with Photoshop and Illustrator for the final treatment.

The Dad poster features a family photo that I thought was a good composition. I wanted the dad at the center and the kids in the photo frame him pretty well. One issue was the young girl was looking away from the camera so I edited the photo to pull her gaze back in so the viewer was not pulled away by her gaze.

Another great thing about the photo is that the colors are not intense, so the graphic elements do not need to compete to be visible. The brightness and whiteness of the photo did present a few challenges that were overcome by introducing more shadows behind the graphic to make it pop. 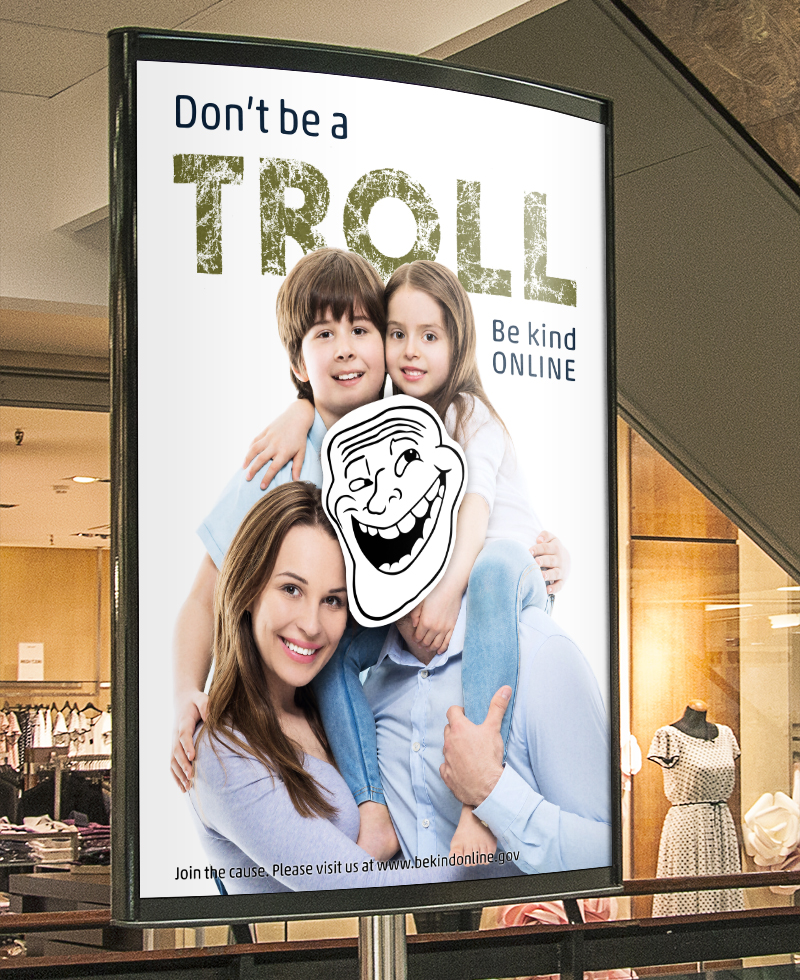 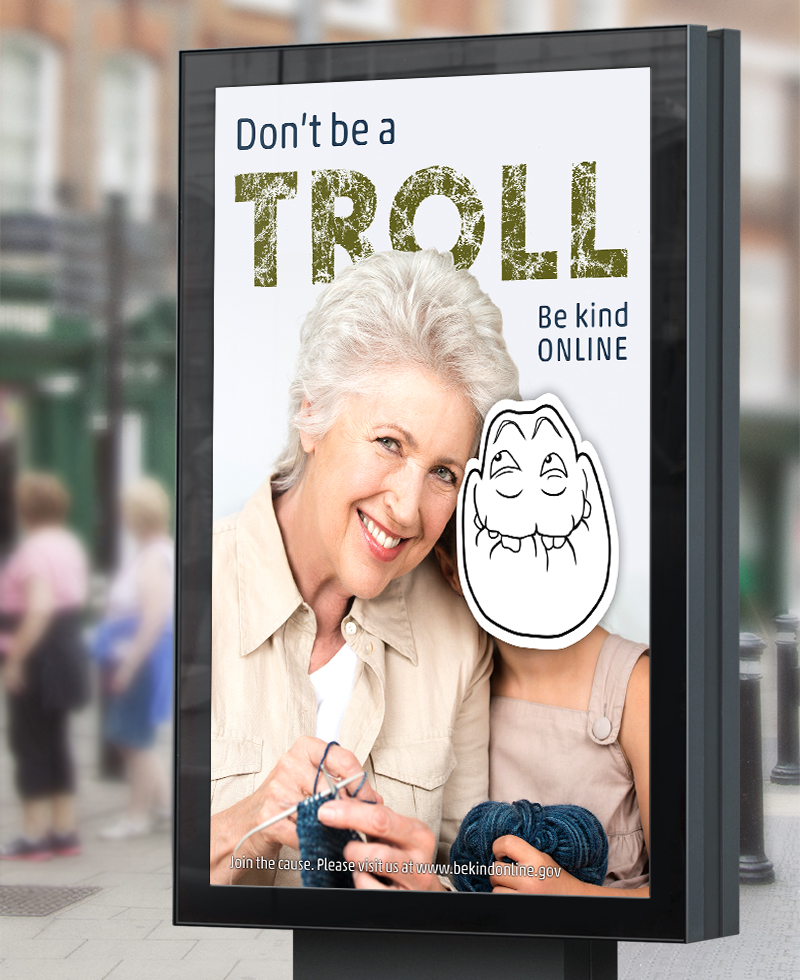 This photo was one that presented and interesting dilemma, would it be too mean-spirited to suggest either grandma or a child could be a troll? I decided that either could be a choice largely because the temptation to be rude affects everyone and much of this behavior is learned at a young age. That said, social media for the young is not as likely a scenario though I imagine this could change easily in the future.

Another reason I like this poster is the warm color tones in the skin is a nice compiment to the blue and neutral colors in the yarn and the type. It's not as washed out as the Dad poster and the colors still to not dominate the image like the friends poster.

Side by side, the posters feel unified to me, though each one has its own character. The priority to unify the look is to help the campaign read as a brand so that no matter which poster you are viewing, you recognize it as part of a campaign. 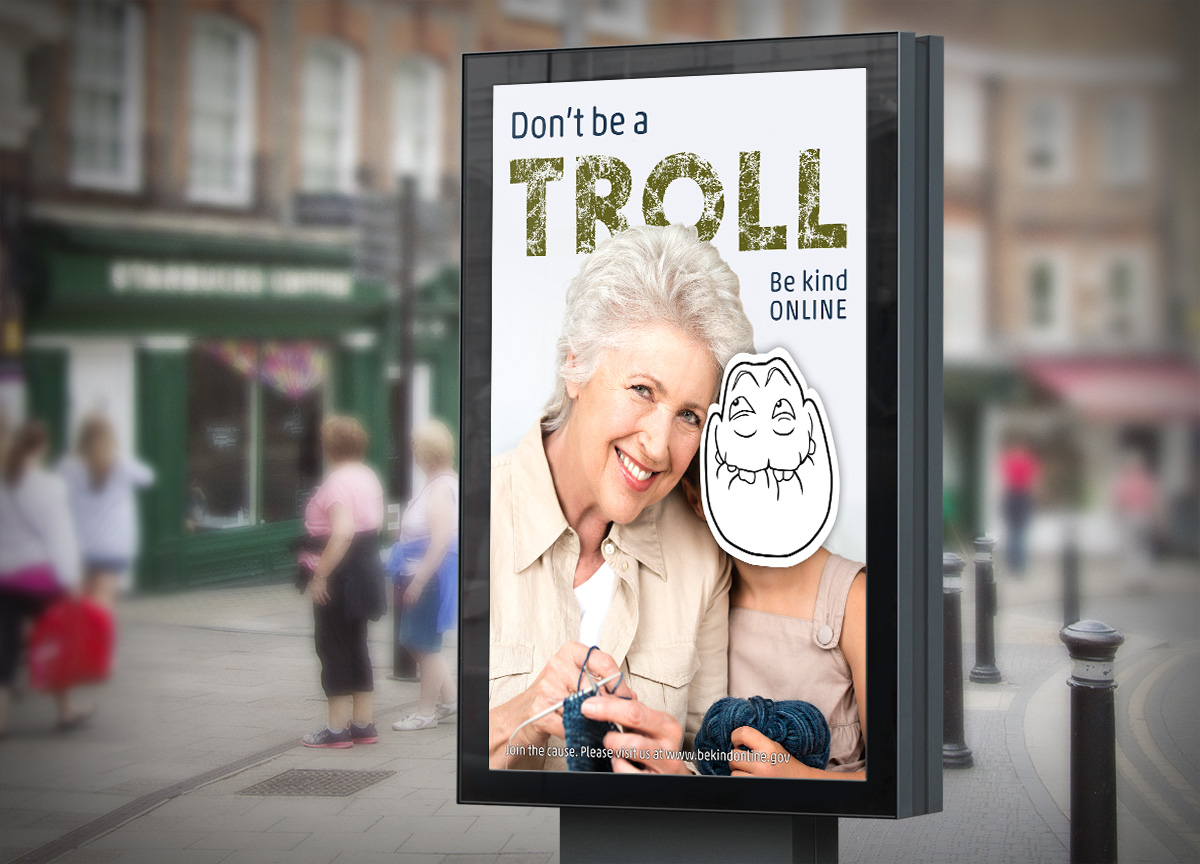