While at Rainbow Studios, I was asked to help out with the Britney's Dance Beat video game project. I created a 3d model of Britney Spears and set up and animated the intro cinematic sequence for the game. Michael Klucher, Tyler Williams, and Chris Baranowski helped with technical setup, bodysuit textures, and animation and rigging.

I also created renders of her face to be used on the ingame models of Britney. I rendered and comped several marketing illustrations for various posters and ads.

The game was a fun game to play. Limited availability and licensing of Britney's music was an issue. Only five of her songs ended up included, and that basically doomed the marketability of the game.

All in all it was a great experience and we accomplished a lot. It's too bad the game didn't have more of her songs, or it would have been a much more successful release considering Britney's popularity and star power.

To this point in my 3D career, This was the most ambitious 3D model I could conceive of creating. Britney Spears was a massive star and was on track to be the most searched person on the internet in both 2003 and 2004

This meant that both failure and success would be huge and it was up to me and our team to create a model that looked good, pleased Britney's fans, Britney's management, the THQ management and production team, but most of all, Britney herself. After some thought, I decided to shoot for creating a model that pleased Britney. All the other parties would be pleased if Britney herself was.

Think about it. No one looks at you more than you. We see ourselves in the mirror, usually several times per day, so we know how we look. Then there's our own perception of how we see ourselves along with our own insecurities, conceits, how we feel we look inside, and how we wish we looked. All this goes into our self image. Add to that the image conciousness and pressure of a celebrity to fit an image and you can appreciate the high bar I could see us trying to hit for Britney. 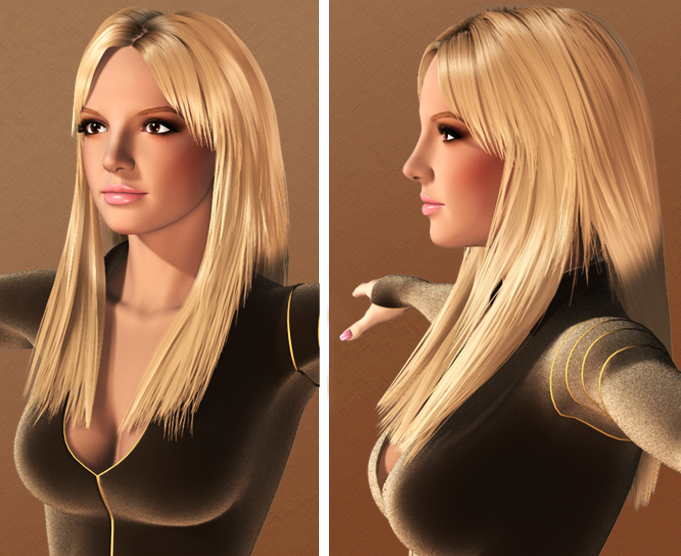 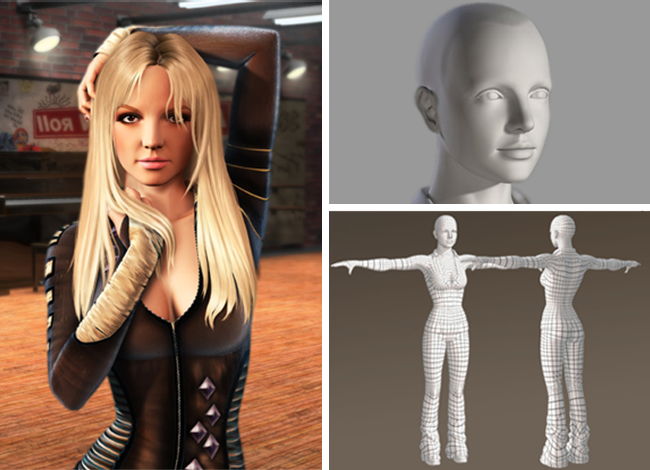 Naturally most of the effort wen into the face. I had access to several side-front view photoshoot images. A 3d scan was done, but this was not done under ideal conditions and wad basically useless. After a 1st pass I was happy with what I was getting using the photographic reference, so I scrapped the plan to use the scan data. This was 2002, so there was not such thing as subdivision surfaces or zbrush. the model was straight up polygon modeling using Mirai, which was a newer iteration by the engineer who had built Nichimen NWorld. The model was created in Mirai and imported into 3ds Max for UV Unwrapping and Texturing. Textures were painted in Photoshop.

Rigging for Britney was done in 3ds Max for both the body (including a mo-cap rig) and head and face setup for facial animation. Hair was styled and setup for animation in 3ds Max. By far the hardest set of objects to animate was the hair. Again, this was 2002, and software was young and we were pushing the limits.

Rigging the body is a big job and is the one thing I don't have a ton of experience with. I do have some expertise in facial rigging, so that's where I usually spend my efforts on a character rig.

For the Britney Spears character, we needed a rig that was capable of realistic motion, though the dance moves we were to use would not be too extreme. The problem areas are usually the shoulders and Chris did a great job with the setup and weighting.

The facial rig was pretty much all morph targets with direct channels set up for the animation. this is an area that would proably be very different today. For one thing we'd be animating in Maya, so the rigs would be maya based with costum controls.

The facial rig would feature much more aggressive morphing that lends to a more naturally deforming face to help get through the uncanny valley and over the other side. 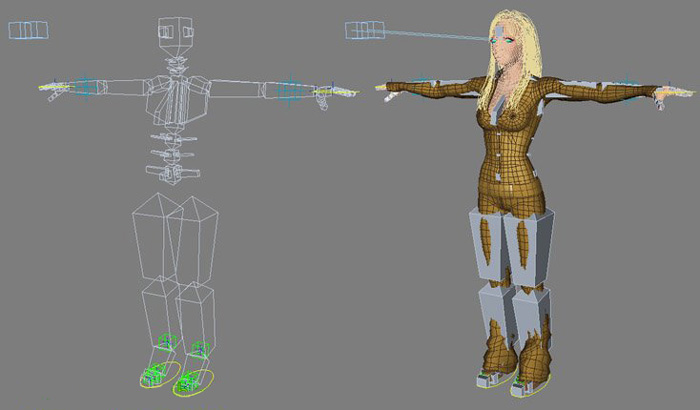 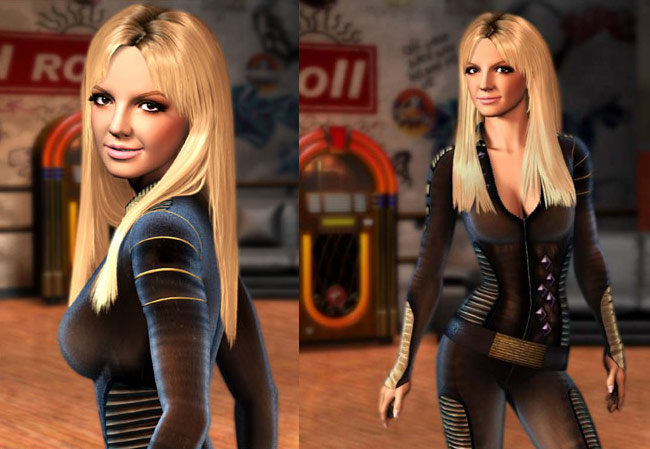 Rainbow Studios hired a local dance professional to come to our motion capture stage and perform the turning dance move and walk required for the animation. It was a quick session and we had what we needed in a couple of takes.

Chris Baranowski cleaned up the animation and got the scene's animation. The final task was for me to add the facial animation synced to the audio track for the shot. The great thing about animating is that you get to use all the tools and features you have worked hard to build into the character.

This is what makes this stage a big payoff for me after all the work of planning and building the character model and facial morph targets.

When we finished, we realized we had something good. Our producers showed the model by Britney's management team and they asked for a couple of changes. The revisions were made and the model was finally presented to Britney Spears herself for approval. She loved it! So much so, the we were asked to render some orthographic shots of the head model to use to assist with finishing the in-game model. 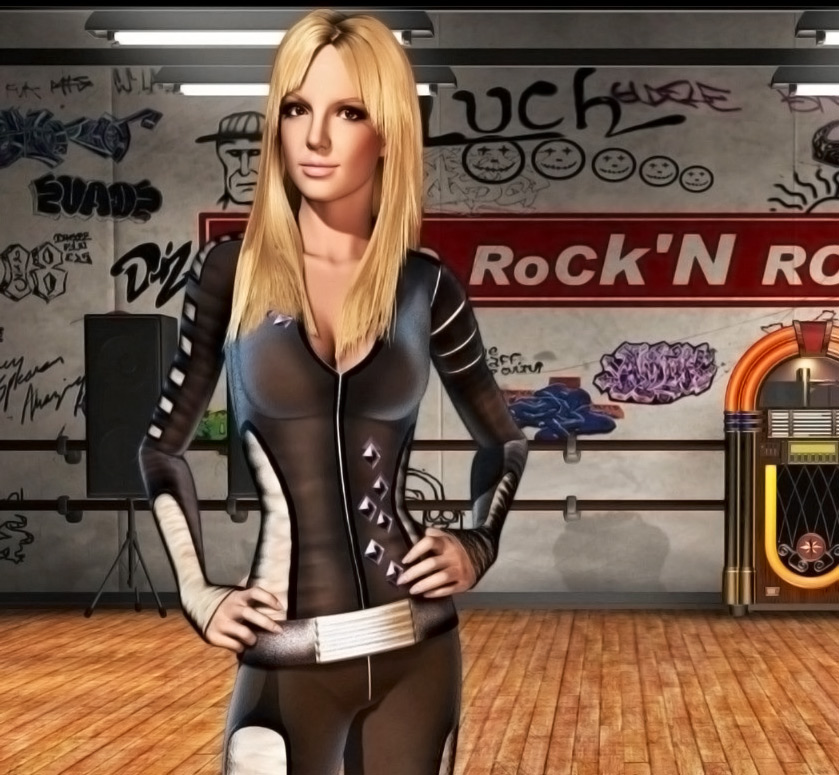 Toward the end of the character development phase, I rendered some test poses to test the rig, and show progress to the production team. It can be dicey to provide these because they are not intended to be finished renders, and you know how much work they still need. The flaws jump right out at me.

This render represented the first attempt at rendering the complete scene. It's important because it gives you an idea how long the rendering will take, what the composition issues will be and the overall success of the rendering.

Animation still presents its challenges with full rig and hair, but this is the first indication what kind of time frame the full rendering process will take.

Having gone through the process before, I had a hunch these preliminary renders might get used for more than just internal reviews. As much as we tell producers that the images were just for internal review, a few of them try to save on the expense of final renders by using them for key art.

Sure enough, some of these renders ended up on cover art! You can see that the suit design, face model, shoulder and arm deformations, and hair are all preliminary. Ugh.

If we were to do it again, like all projects, there are probably things we'd change, but we were happy to get what we got out of the model. It's still true that game characters can appear a bit uncanny and lifeless, so this shows how successful we really were to do what we did back in 2002. 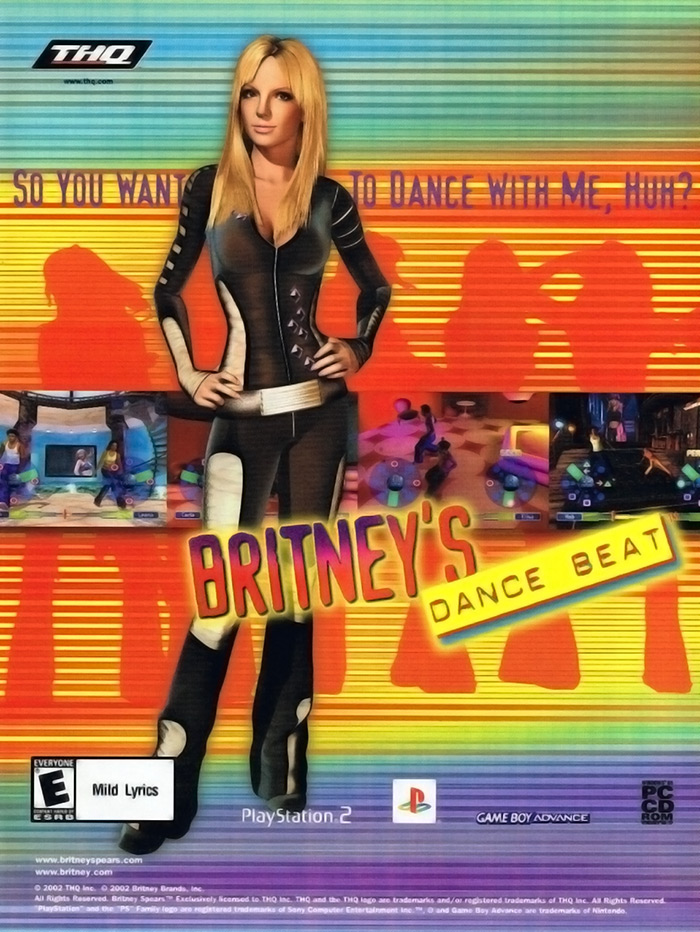 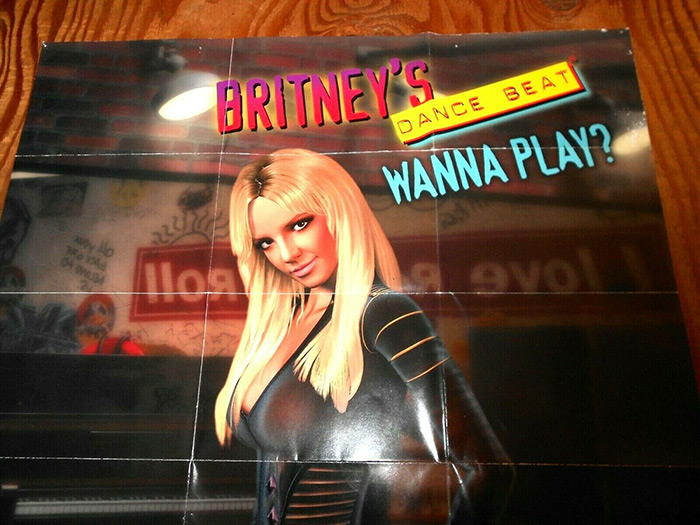 One of the main pieces of marketing artwork was the door poster that was featured in several magazine inserts. This was a full height door poster, and it was popular. the full height image was also used in several box art images along with the preliminary render.

We knew the game would probably not review well. Like I said above, the game had a great interface and dance mechanics. It had everything except a big enough library of Britney's best and most famous songs.

I am sure privately most of the cork-sniffing soy-boy hipster reviewers had secret fantasy relationships with Britney Spears. But it wasn't "cool" to be a Britney fan in the games industry at the time. So, I expected poor reviews from the basement-dweller class of gamers, and they came through, unfortunately.

For years ever since, many gamers have emailed me asking for the Britney 3d Model, so they could do "research".