While at GlyphX Inc. of Orem, Utah, I worked on characters, animation, lighting and special effects for the intro cinematic to Legacy of Kain: Soul Reaver. It was an amazing project to be part of and also very grueling since there were two artists on the project.

I modeled and textured the lieutenants and Raziel's humanoid body form. I sculpted Kain's head and face, and textured his body. I also textured and modeled a few sets.

I created the character animation, the cloth special effects, and set up the cameras an compositions for the shots. Todd and I worked night and day to get it done. We finished on time and delivered just before it was due. It was an epic project.

Kain was the first head and face that I sculpted with clay which was then digitized. I was working for Glyphx and Todd Sheridan at the time and he taught me the process and guided me through the steps. He finished the model and textures while I moved to texturing his and Raziel's body.

I sculpted the skull for the Soul Reaver sword and finsihed the model in 3ds Max and moving to textures working from the concept sketches provided by the Crystal Dynamics team. I also textured Kain's throne which was the centerpiece of the set for the opening scene in the cinematic.

Animating Raziel and Kain was a challenge. I used Biped to handle the walk-up to the throne, Kain's walk down off the thrown and around Raziel, and the tearing down of the wings.

The waterfall and cloth effects were a huge part of the project and it took a lot of effort to dial in the plugins to handle the cloth. The waterfalls were much easier, but had just as much impact visually. 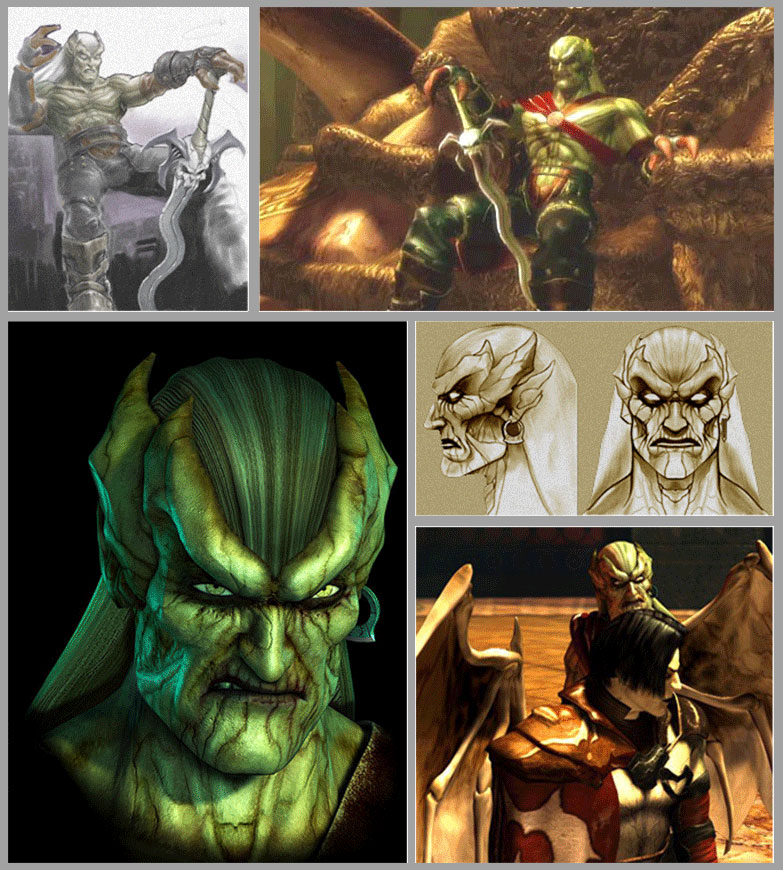 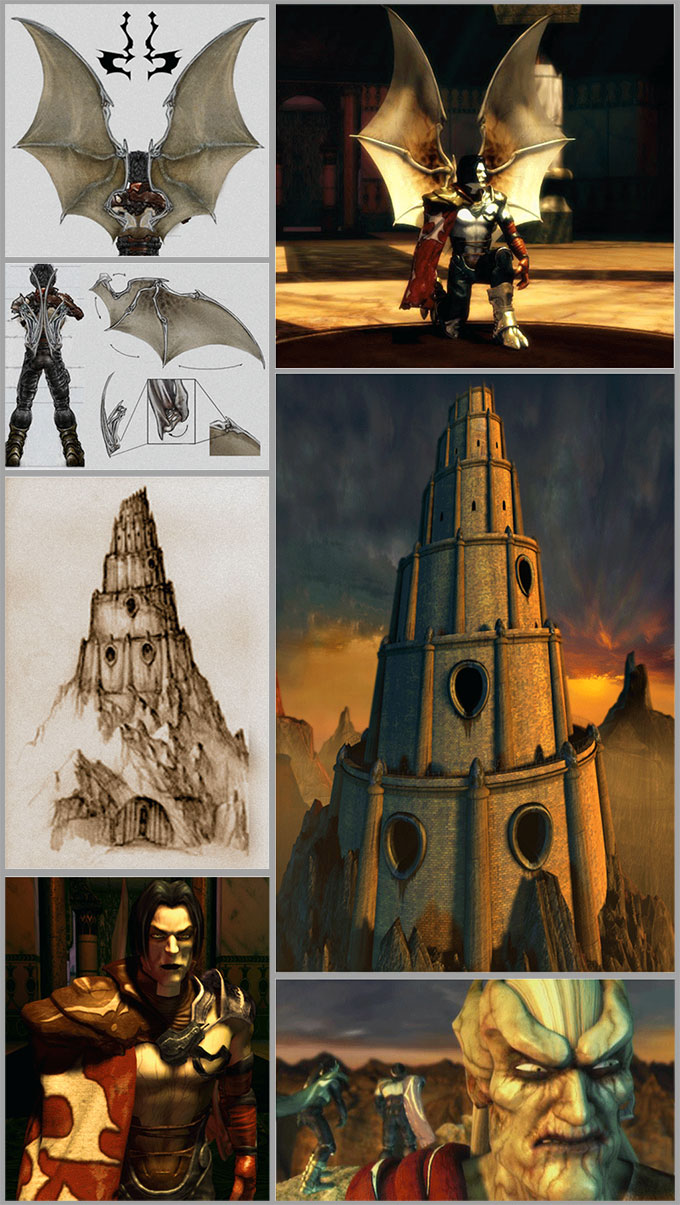 Raziel's opening scene is where he approaches Kain's throne and presents his newly developed wings, demonstrating that he has evolved beyond Kain. Kain is doesn't take this well. I created and set up Raziel's wings for animation in this scene as well as perfomring the character animations for the scene.

I handled animation, lighting and final textures for the opening cinematic set pieces and environments. The opening scene was Kain's throne at the pillars of Nosgoth. The scene includes Raziel and Kain, and the five lieutenants: Turel, Melchiah, Dumah, Zephon, and Rahab

One set piece that I built which is visible though not prominently so in the opening cinematic was the Silenced Cathedral, which is a scene that plays a prominent role in the gameplay's progression. When functioning, the cathedral is an powerful audio-spiritual device of sorts which was designed as a weapon against vampires, hence the reason it had been silenced by the people of Zephon.

I had a ton of fun building, texturing and lighting this model and it remains one of my all-time favorite set pieces.

All of the Lieutenants of Raziel were his brothers. Each have a unique set of characteristics that helped us keep on point with their designs. We mostly knew them by working names from the Crystaal Dynamics team or by the names we gave then whcih helped us remember how they were distinct from the others.

Rahab was evolving toward an ability to survice and thrive in water which was toxic to other vampires as is demonstrated in the opening cinematic. He is developing gills under his jaw, so we just called him "fish dude" while we worked on his character assets.

Turel had a working name based on the Morlocks from H.G. Wells' The Time Machine. 'Morlock' suited him as he was large, powerful and was a formidable enemy. Turel was omitted from most of the planned game, much to my disappointment but this happens all the time in showbiz. :/ 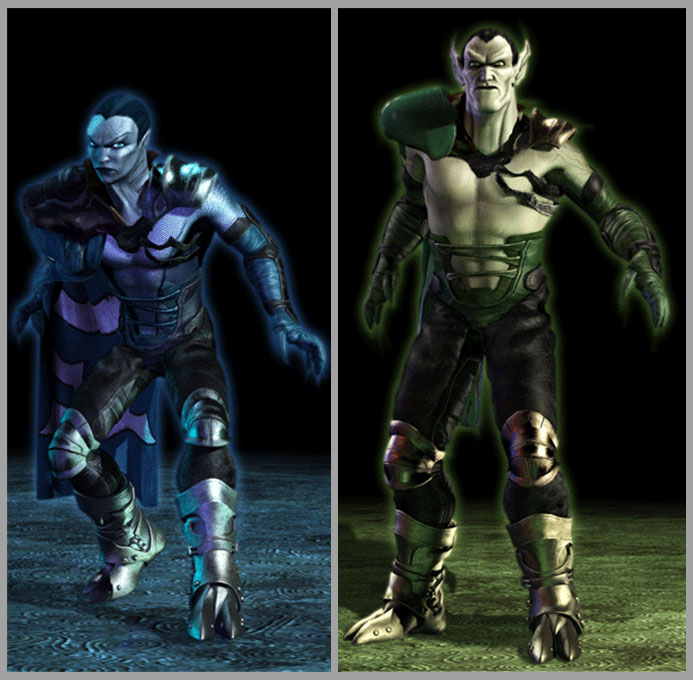 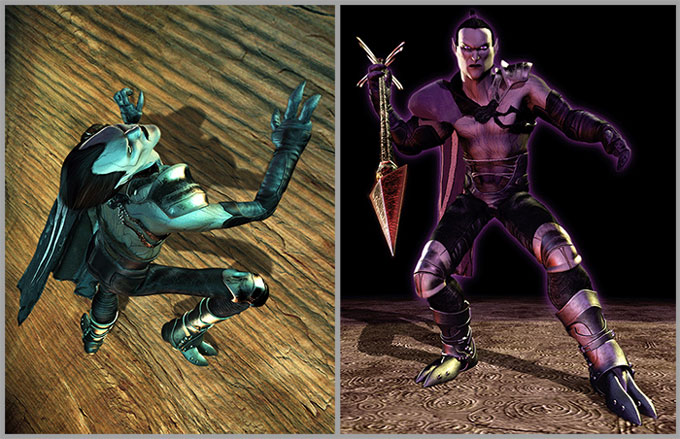 Zephon was evolving toward a long limbed wall crawling creature, like a spider, so we called him wall-crawler. Zephon has an interesting head and face design that I found interesting, so I selected him as a personal development project which you can see in the banner above.

Dumah, was a warrior based character that would be similar to a Samurai, so we called him 'samurai' or 'ninja'. Dumah wore a ponytail like Turel, but his was near the top of his head, similar to a samurai top knot.

Melchiah and The Soul Reaver

Melchiah was the oddest-looking design we created. He's basically a fat-ish, bald slasher or skinner because he uses the skins of others as his own. In this way, he's like a zombie.

The hebrew-based names and hebrewisms were not lost on us. We thought they were rather cool. It gives the storyline a biblical architype vibe. Mixed with the Lovecraft lore, it seems to work.

The Soul Reaver is the star object of the game and starts out as Kain's sword. Naturally it ends up in Raziel's hands and he moves through the game. I love the snake-like shape of the blade and the rot that runs down from the mouth of the skull. Very gross. :D 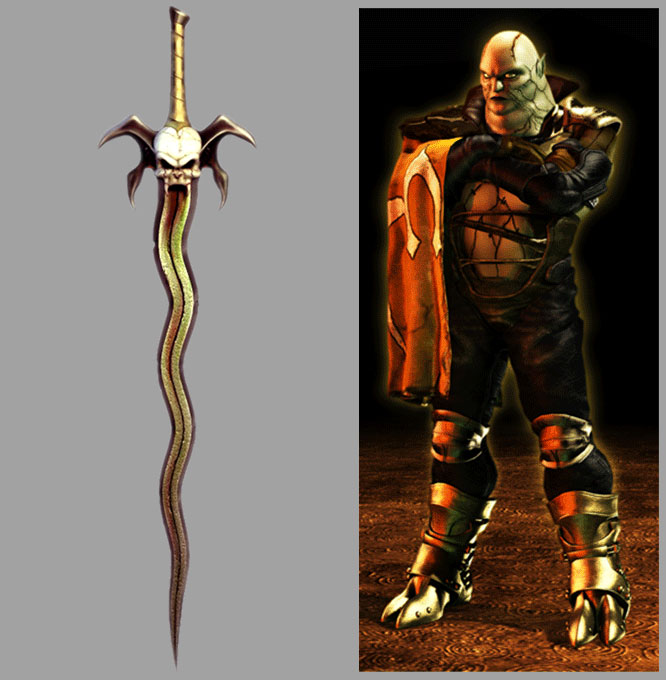